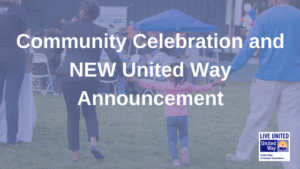 The community is invited to join United Way of Greater Greensboro on August 31, 5 to 7 p.m., at Belk, Friendly Center in Greensboro, for a celebration like they have never seen before.

The celebration, which kicks off United Way’s 2016 campaign, will include free food, drinks, giveaways, a DJ and more and will feature a special announcement outlining the “NEW” United Way at 6 p.m. Attendees are asked to bring non-perishable food, gently used handbags or school supplies.

Strader says, “I am honored and thrilled to serve as this year’s campaign chair. Our focus on reducing poverty is brave and bold and we are achieving positive results. We are grateful to all of our supporters including volunteers, community partners, corporations, foundations and citizens who want to make a difference in our community.”

Additionally during the celebration, results from this year’s Pacesetter Campaign that began in July will be announced. The Pacesetter Campaign is made of 17 companies that decided to conduct their United Way campaigns early to pave the way for a successful community-wide campaign.

The NEW United Way is creating partnerships to reduce poverty in greater Greensboro. We bring together dynamic and caring professionals and volunteers who teach, coach and inspire the 57,000 people in our community, struggling to obtain basic needs. The federal government defines poverty as family of four earning $24,300 per year. With so many of our neighbors struggling to meet basic needs, United Way believes poverty must be addressed so that our community can thrive.