On June 13, at its annual meeting, United Way of Greater Greensboro announced new Board and Campaign Chairs and donors voted unanimously to welcome six new members to its board of directors.

The United Way of Greater Greensboro board of directors provides direction, support, guidance, and governance to the organization by engaging business leaders as committed volunteers and leveraging expertise to advance the work of United Way. 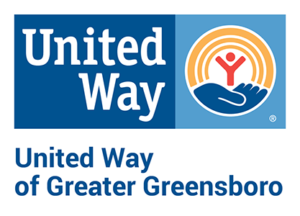 United Way of Greater Greensboro is proud to announce its 2017 campaign raised a total of $11,230,000. The United Way is leading the local movement to end poverty in Greensboro through partnerships with human service organizations.

Over 14,000 caring people and 344 companies gave, 10 strategic grants were awarded and a lead estate and trust gift in honor of Thornton H. and Margaret Williams Brooks was received during this campaign cycle.

Phyllis Brooks and Jane Lybrook daughters of Thornton and Margaret Brooks say “Community was so important to our parents. They always felt like Greensboro was home and the center of everything. To them it was the heart of the Piedmont.”

Contributions made to the campaign will be invested in programs and initiatives that increase the economic mobility of Greensboro children and families.

“Our 95th annual United Way campaign represents a willingness by citizens to give back by providing a hand up to those in need. Greensboro is a place where philanthropy translates into hope and love in support of education and training to get jobs” says Michelle Gethers-Clark, President and CEO of UWGG.

“We appreciate how much the community has embraced the work of United Way to eradicate poverty in our city. The bold steps that have been taken by many in the past several years to tackle this issue is so admirable. The results are impressive and as more join our cause we will achieve the ultimate goal. Everyone deserves a chance in life to be successful. We applaud all who have helped in any way in this endeavor,” says Chuck Burns, 2017 Campaign Chair.

At 11:30 a.m. on Monday, May 21, 2018, 600 people will attend United Way of Greater Greensboro’s annual Speakers Series at Grandover Resort & Conference Center to hear Leigh Anne Tuohy, the inspirational subject of The Blind Side, share her amazing personal story about the power of turning around to help others.

During the luncheon United Way will present two annual awards that will honor members of the Sloan and Benjamin families for their tremendous compassion and impact in our community.

“We are so fortunate to have such caring and generous families in our community. We are honored to recognize them for their leadership in philanthropy and overall desire to do good. They are true heroes and lead a life of authentic compassion,” says Michelle Gethers-Clark, President & CEO of United Way of Greater Greensboro.

The Lifetime Achievement Award is presented to individuals or couples who demonstrate a history of extraordinary leadership, philanthropy, and true “love of mankind”. In addition, they exemplify a shared dedication to United Way of Greater Greensboro’s mission, vision, and values through decades of service and exceptional support of programs that transform lives in our community. We are delighted to recognize the Sloans for a lifetime of giving and compassion.

The Legacy Award is presented to families who demonstrate a legacy of giving and community impact. In addition, they exemplify a shared dedication to United Way of Greater Greensboro’s mission, vision and values through service and exceptional support of programs that transform lives in our community. We are delighted to recognize the Benjamin Family for their love of mankind and family legacy of generosity in our community.

More About the Sloan Family
Linda and Tom Sloan have demonstrated incredible leadership with United Way as loyal Tocqueville Society members. They continue to lead the charge to create positive impact throughout Greensboro.

“It is a privilege to be able to give back to the community and to be able to invest in the future of Greensboro. Charitable giving is about giving to people who are involved in ideas and organizations that you trust and value. We have always had great confidence in United Way leadership and the impact of United Way,” said Tom and Linda Sloan.

More About the Benjamin Family
The Benjamin family has a long legacy of multi-generational philanthropy and enrichment within the greater Greensboro community. Their family has made the community a better place for all. They have devoted their time, energy, and funding to help those in need. Their family legacy of commitment to United Way and other organizations is remarkable.

Leading by example almost 100 years ago, Ann and Bill Benjamin’s great grandfather, Emanuel Sternberger, was a founding board member of The Community Chest which was the precursor of United Way of Greater Greensboro.

Other donations by their family to Greensboro include property for the Sternberger Children’s Hospital, Wesley Long Hospital, Benjamin Bog Garden, The Blanche S. Benjamin Branch Library, Bertha Sternberger School, and Benjamin Parkway. In addition, they donated property used as headquarters for Junior Achievement and The Junior League of Greensboro.

Joan and Mente Benjamin, Ann and Bill’s parents, have been involved in numerous philanthropic endeavors. They are loyal Tocqueville Society contributors to United Way. Through their long-time support of United Way, they inspired their family to continue their philanthropic tradition.

Ann and her husband Ben Zuraw are dedicated United Way supporters and have served both locally and at the international level.

Ann serves on the United Way Worldwide Leadership Council. She is past chair of United Way Tocqueville Women and currently serves on the Women United Cabinet and Tocqueville Strategy Committee. Her additional leadership and community support include Well Spring Retirement Community, Triad Stage and The Community Foundation of Greater Greensboro.

Ben has served on the board of directors of United Way, Partners Ending Homelessness, WellSpring Solutions, and volunteers at Greensboro Day School.

Bill and Margaret Benjamin have also been long time United Way supporters and active volunteers. Both Margaret and Bill have served on the United Way allocation review committees and have a legacy of service to our community.

“We are so proud to build on the example Emanuel Sternberger set for the Benjamin family to continue a legacy of giving in the community. Our heartfelt thanks to United Way for its outstanding tradition of leadership and service in making our community a more caring and more united place now and into the future,” said Margaret and Bill Benjamin.

The 2018 United Way Community Speaker Series is open to the public and tickets and sponsorships are available. For more information, contact United Way at 336.378.6600 or visit their website at https://www.unitedwaygso.org/speakerseries/

The City of Greensboro is closing its two Disaster Relief Centers this week as it transitions its focus from tornado response to long-term recovery efforts. The Peeler Recreation Center location is closing at 4 p.m. on Wednesday, May 2, and the Willow Oaks Community Center location is closing at noon on Friday, May 4. The two sites have been open for more than a week to assist residents affected by the April 15 tornado.

The City is still attempting to contact all former occupants of homes that were destroyed, or suffered major damage, during the tornado. It’s also awaiting decisions from state and federal agencies for financial support, who surveyed the affected areas last week.

All homeowners who have been displaced because of a destroyed home or significant damage should contact the Red Cross to see if they qualify for disaster relief funds. The Red Cross will be at the Willow Oaks Community Center until noon on Friday, May 4. After this time, the Red Cross is open at its 1501 Yanceyville St. location.

Beginning at noon on Friday, May 4, residents may pick up food and supplies previously donated to the City at the following community partner locations:

United Way of Greater Greensboro is pleased to announce it has directed $64,000 from GSO Tornado Relief donations to the Greensboro Housing Coalition for immediate housing stability and rehousing of households impacted by the April 15, 2018 tornado in Greensboro, NC.

“Housing is the most important human need we can give our neighbors. The outpouring of love and compassion in the community is great and we want to say thank you to everyone for being heroes. We are stronger together,” says Michelle Gethers-Clark, President and CEO, United Way of Greater Greensboro.

The Greensboro Housing Coalition’s main relief focus at this time is to assist households whose homes were completely destroyed or experienced major damage, as assessed by Guilford County Emergency Management Services.

As GSO Tornado Relief donations continue to be collected and processed, United Way will issue weekly checks as identified and directed by the City and Guilford County Disaster Response committee.

The committee has determined future United Way GSO Tornado Relief distributions will be directed based on need to a combination of housing, getting students back in school, getting adults back to work, and basic needs.

In response to the April 15, 2018 tornado that affected our neighbors, we will continue to collaborate with official disaster response representatives. As updated information is available, we are committed to passing it along as soon as possible.

Impacted residents may pick up food and supplies at the following community partner locations:

With the coordinated support of the City of Greensboro and Guilford County, United Way of Greater Greensboro is accepting monetary donations to support local organizations working directly with children, families and adults impacted by the tornado.

Local organizations receiving funding will be selected by the City of Greensboro and Guilford County Disaster Response Committee.