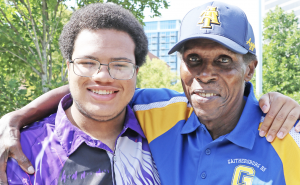 “Mr. Sutton was the one who kept me going. I don’t think I would have graduated without his support.“ – Dominique Alexander

As a retired NC A&T State University basketball coach, Bill Sutton is no stranger to offering young men motivation, and as a young man navigating the ups and downs of life, Dominique Alexander is always looking to improve his game.

The two have formed a lasting relationship through United Way of Greater Greensboro’s African American Male Initiative (AAMI), which is a component of the organization’s Mentoring Matters program. With the support of Communities in Schools, AAMI is offered to students at Wiley Elementary, Jackson Middle, and Smith High Schools.

When AAMI began 11 years ago, Bill was among the first group of men to volunteer as a mentor. Over the years, he has mentored 10 youth, encouraging some along their paths from elementary school to college.

United Way supports mentoring as a pathway out of poverty because it’s proven to help youth make responsible choices, excel in school, and avoid risky behaviors.

Dominique was in elementary school when Bill became his mentor and the two have stayed connected ever since. Dominique, who lives with his grandmother, says Bill has been there for him through some pretty tough situations.

“Mentoring, like life, is a journey and things don’t always go the way you think they should. But throughout all of it, you have to accentuate the positive. Sometimes, just being positive and encouraging is all someone needs to make it through,” said Bill.

As Dominique made his way through high school, Bill was one of a few people invited to his graduation. “Mr. Sutton is always there when I need him. And I’ve needed his support a lot,” said Dominique. He adds, “Mr. Sutton was the one who kept me going. I don’t think I would have graduated without his support. After graduation, Mr. Sutton helped me get a job, and he helped me enroll in college.”

“Through it All” – Dominique and Bill have formed a relationship that has lasted nearly a decade, and shows no signs of stopping.