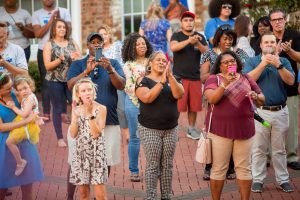 (Greensboro, NC, September 13, 2019) – The community is invited to join United Way of Greater Greensboro on September 27, 6 to 9 p.m., at Revolution Mill in Greensboro for United Way’s annual Community Celebration to END Poverty.

The family-friendly event will feature live music by JujuGuru. Attendees will be treated to beer from Natty Greene’s and will have access to food trucks including Bandito Burrito and Classic Cookout.

During the celebration, results from this year’s Pacesetter Campaign (which began in July) will be announced. The Pacesetter Campaign includes 12 companies that decided to conduct their United Way campaigns early to set the pace for a successful community-wide campaign.