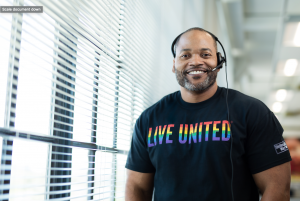 Greensboro, NC (February 11, 2020) – Today is National 211 Day. By simply dialing 211, people who need help can be connected to multiple support services. Caring operators are ready to help 24/7/365. The service is free, confidential and available in most languages. Local resources are also available by visiting www.NC211.org.

Of the 4,363 calls received from greater Greensboro residents, housing and shelter, utilities, health care, employment and income, and food were the top requests. Other requests included mental health and addiction, clothing and household needs, child care and parenting, legal and public safety services, transportation and education.

Aaron is a single father with three little girls. After falling on hard times and going from two household incomes to one, he called his children’s school social worker for help. The school social worker connected Aaron with United Ways’s 211 service to identify some resources that might help get him back on his feet. Things were looking up for his family until Aaron lost his job. Aaron was able to find a new job within a month, but had fallen behind once again with bills piling up and debt building.

After receiving an eviction notice for the day before Thanksgiving, Aaron reached out to his children’s school social worker who reconnected him again with 211.  It turned out that $132 was the only thing standing between Aaron and his three little girls being homeless on Thanksgiving.

The 211 team scrambled. They had conversations with the school social worker, the landlord, and Aaron -gathering documents and straightening out the timeline. Within hours, a promissory note was sent to the landlord and the eviction was stopped. Aaron could not have been more grateful, repeatedly saying, “Thank you, thank you, thank you. You don’t know what this means.”  Aaron and his three little girls were together, at home for Thanksgiving.