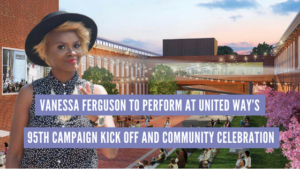 The community is invited to join United Way of Greater Greensboro on August 31, 5:30 to 7 p.m., at Revolution Mill in Greensboro for a celebration 95 years in the making.

The entirely free event, which kicks off United Way’s 2017 campaign also celebrates United Way’s 95th year in the community and will feature a performance by Vanessa Ferguson. Ferguson was a finalist on NBC’s The Voice and tours the U.S.

Attendees will also be treated to Natty Greene’s beer, Cugino Forno pizza and gelato, Wow What a Drink juice, water, a DJ and more. People are encouraged to RSVP at www.UnitedWayGSO.org.

Participants should enter Revolution Mill at Textile Drive and walk across the bridge. United Way volunteers will be on hand to offer directions to the event location.

Additionally during the celebration, results from this year’s Pacesetter Campaign, which began in July, will be announced. The Pacesetter Campaign includes 18 companies that decided to conduct their United Way campaigns early to set the pace for a successful community-wide campaign.