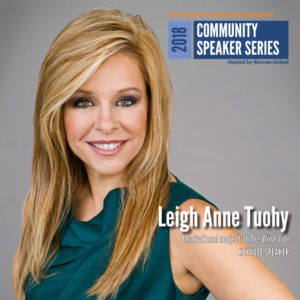 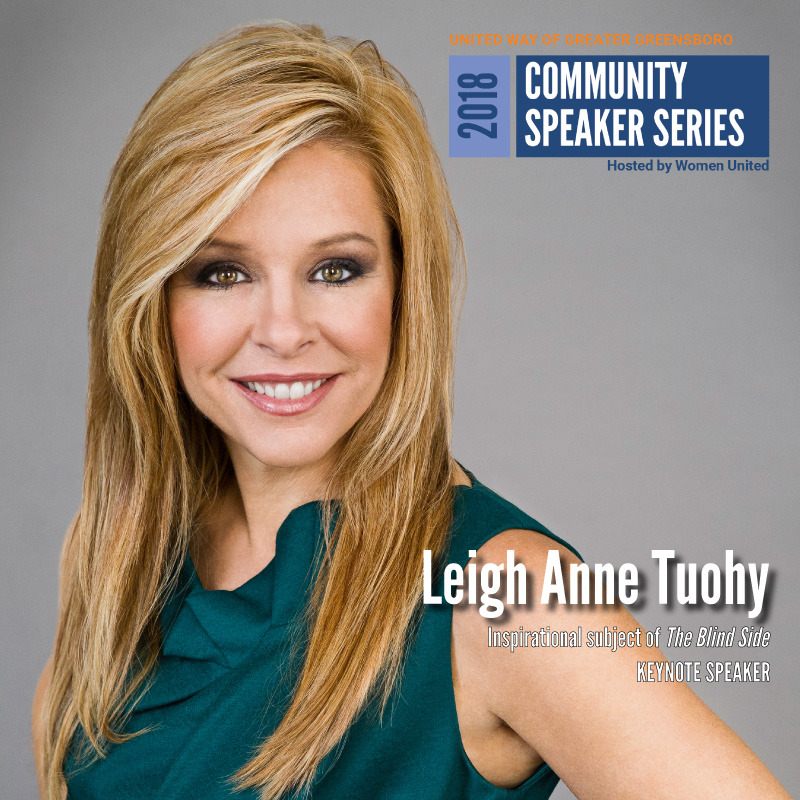 Greensboro, NC (March 16, 2018) – United Way of Greater Greensboro is welcoming the inspirational subject of The Blind Side and New York Times best-selling author, Leigh Anne Tuohy, as this year’s keynote for the 2018 Community Speaker Series at the Grandover Resort and Conference Center on May 21, 11:30 a.m. to 1 p.m. The media is invited to attend.

Leigh Anne and her family legally adopted a teenage homeless foster child. They raised and educated him and encouraged his passion for football. He later became the NFL Super Bowl Champion, Michael Oher.

Her personal journey was later documented in Michael Lewis’ New York Times best-selling 2006 story The Blind Side: Evolution of a Game, which follows Oher from his impoverished hopeless beginnings to how Leigh Anne and her husband, Sean, adopted him to reach football success. In 2009, the book was adapted into the film, The Blind Side in which Sandra Bullock portrayed Leigh Anne in an Academy Award winning role.

At United Way’s event, Leigh Anne will share her personal “Blind Side” observations, from seeing Michael for the first time to how the experience changed her as a person and the Tuohy’s as a family. She will also share the importance of recognizing the full potential of individuals in our community and inspiring us to recognize value in others.

Leigh Anne has authored two New York Times best-selling books, entitled Turn Around: Reach Out, Give Back, and Get Moving and In a Heartbeat: Sharing the power of Cheerful Giving

The Tuohy’s continue to make an impact nationwide with the establishment of their charity, The Making It Happen Foundation, which promotes awareness, provides hope, and improves standards of living for all the children fighting to survive in the invisible cracks of society. In 2010, she was awarded an honorary doctorate from Christian Brothers University and is a member on the Board of Directors for Taco Bell Foundation for Teens, an organization dedicated to supporting teens on their path to graduate from high school and prepare them for a successful future.

United Way of Greater Greensboro’s Community Speaker Series convenes people from across our community to learn together, connect with one another, and be inspired while supporting the work of United Way. United Way’s Women United is hosting this year’s event and VF Corporation is this year’s presenting sponsor. Tickets are on sale and can be purchased at www.UnitedWayGSO.org/SpeakerSeries.