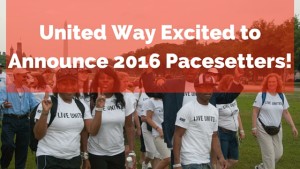 Pacesetters represent a strong commitment to supporting long-term solutions addressing poverty that teach, coach and inspire the 57,000 people in Greensboro struggling to obtain basic needs. Participants also pave the way for an exciting and successful community-wide campaign that begins September 1.

“Pacesetters represent dedicated civic and corporate leaders who not only want to see their community thrive, but are willing to lead the way,” says Chuck Burns, Corporate Development Officer, Vice President of First Citizens Bank. Burns is chairing the Pacesetter Campaign and is a member of the United Way Board of Directors.

Results from the Pacesetter Campaign will be shared in a NEW and exciting way at United Way’s official 2016 Campaign Kick Off Celebration August 31, 5 to 7 p.m. located at Belk, Friendly Center in Greensboro.

“With the help of this year’s pacesetters, I’m confident we will announce that we’ve reached our first $1 million milestone during our official campaign kick off celebration,” adds Burns.