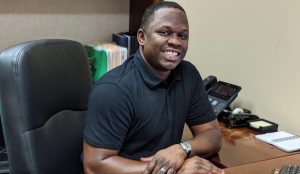 Greensboro, NC (January 17, 2020) –  United Way of Greater Greensboro Vice President of Finance and Chief Financial Officer Brian Graham was named one of Black Business Ink magazine’s “40 Under 40 Most Influential African Americans in the Piedmont,” which honors individuals from Forsyth and Guilford counties.

According to Black Business Ink, this inaugural list of the 40 Under 40 Most Influential African Americans in the Piedmont is comprised of outstanding leaders who are confident, ambitious and achievement oriented. They help build their community, seek new challenges at work and are not afraid to question authority. Each awardee was nominated and considered by two selection committees, one in Guilford County and one in Forsyth County.

Graham joined United Way of Greater Greensboro in his role as Vice President of Finance and Chief Financial Officer in March 2019. Graham leads United Way’s finance team and oversees all of financial and operational areas with a focus on strategic management of the organization’s resources to maximize return on investment. He is a graduate of North Carolina A&T State University and the University of Virginia. Graham has over 15 years of financial leadership in nonprofit organizations as well as 5 years of public accounting experience.

A gala honoring the award recipients will be held on February 22, 2020.